Our company exports a lot of X-ray equipment to Africa

From a global perspective, the epidemic is far from over. More and more international organizations and media began to focus on a piece of land that was less concerned about in the early stage of the outbreak-Africa.
As the second continent in the world, it includes nearly 60 different countries and regions. It has a population of about 1.3 billion, accounting for 16.72% of the world ’s total population. The ethnicity of Africa is complex, and the gap between the rich and the poor is huge. After suffering from the scourge of Ebola, dengue fever, AIDS and other locust disasters, it is now involved in the global epidemic of smoke and smoke.
According to Africanews data, as of 14:00, April 22, Beijing time, a total of 24,696 cases were diagnosed in Africa, with a total of 1,193 deaths and 1405 people recovered. The countries with the most severe epidemics are Egypt, South Africa and Morocco, and the cumulative number of diagnoses exceeds 3000.
According to the data released by the African Centers for Disease Control and Prevention on April 14 and 21, within a week, the growth rate of cases on the African continent was about 54%, and the number of deaths increased by about 42%, and the epidemic continued to deteriorate. Even more dangerous is that the current gap in the supply of test kits in Africa is still large, and the actual number of infections in Africa is greatly underestimated.
China has provided various forms of assistance to African countries, including: On March 18, China and African countries held an expert video conference on the prevention and control of the new coronary pneumonia epidemic, and nearly 300 officials from 24 African countries and the African CDC Participated in this meeting with experts. The meeting lasted for three and a half hours. On the afternoon of April 16, local time, the first batch of anti-epidemic medical experts sent by the Chinese government to Africa arrived at Addis Ababa International Airport in the capital of Ethiopia. A number of medical supplies to aid Ethiopia were also carried on the charter flight; on April 21, a new batch of medical supplies from China to Algeria arrived at Algiers International Airport. Algerian Prime Minister Gerrard and some government staff arrived at the airport to meet them.

Our company exports a lot of X-ray equipment to Africa, including x ray table, to diagnose and treat patients as soon as possible, to help African countries overcome COVID-19. 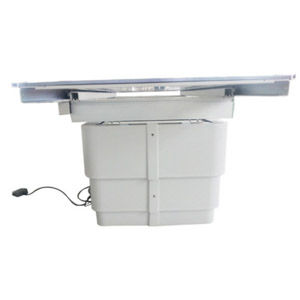